On our way back to New Zealand. First stop - Marquesas

We arrived in Hiva Oa after a rather idyllic 18 day passage from Mexico. The only major event was almost killing Rob with a Portuguese Man of War when he jumped in to tighten up the rudder bearing which was vibrating loose whenever we went faster than 9 knots. This will tell you what sort of wind we had, at least for part of the trip. We had only a short patch of doldrums, one night of lightning and nothing big broke. Rob recovered from the jellyfish sting after massive doses of vitamin C and antihistamines. 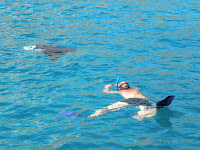 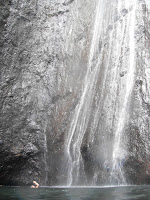 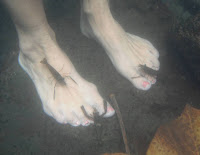 After a few days exploring the island of Hiva Oa, we sailed south to Fatu Hiva. These islands are all made of volcanic rocks, which so remind me of Mt Manaia behind our little cow shed in New Zealand – on a grand scale! We never really saw the top of the mountain at Hiva Oa since it was always shrouded in mist. The striking pinnacle rocks around the anchorage at Fatu Hiva seemed like a birds of prey to me, watchful and a little bit menacing. One in particular reminded me of an owl. We swam in the pool at the base of an awesome waterfall there, where yabbies crawled up my legs in the shallows. Perhaps their timid nips made me complacent about snorkelling at Tahuata Island, our next stop. A possessive moray took exception as I reached out to touch a pencil urchin that was cunningly camouflaging his hole, and chomped down rather hard on 3 fingers. His jaws were like a vice, so thankfully he somehow missed my pinky altogether. The back molars sort of crushed the knuckle on my ring finger, and the long venomous fangs shredded my first two fingers pretty thoroughly. If this ever happens to you, remember bleach. I soaked the wounds in a diluted solution before sticking it all back together with steristrips. The doctor we saw yesterday admonished me for not leaving it open - apparently all bites are prone to infection and must not be stitched so they drain. I guess the bleach worked, since it seems to be healing ok so far. Having use of only one hand, the one that is not connected to my brain, I have not been able to do much. The next morning Rob was in swimming with manta rays that were circling the boat and I could barely even work the camera, relegated as I was to watch from the dry deck. It will be a few more days before I can get in the water.

From Tahuata we stopped at Hanamenu Bay on the north side of Hiva Oa hoping for a fresh water swim in a spring. Just as we were about to step into the surf to get ashore, a fin appeared beside the dingy. I had no desire for another encounter with toothy sea creatures, especially since this one was as long as the dingy and seemed to be following us. We emailed friends who we had hoped to meet in that bay to let them know why we had left in a hurry, and they sent a note back to say they had not let their little boy jump in to swim with a manta ray there because of our note. They later saw the shark when they tried to land their dingy and were glad of our warning.

We had only a short visit at Ua Pou Island, with its totally amazing visual feast of volcanic spires. It seems that all these places deserve a stay of several weeks to get to know them, but we have just a 3-month visa for the entire French Polynesia region, which includes the Tuamotus and Tahiti. Our last stop in the Marquesas is Nuku Hiva, the capital of the Marquesas, before we set off for the Tuamotus in a few days.

We are amazed to find out that we can update a blog using our marine radio, so have been posting on a regular basis to our ‘sailblog’. Check it out using the link on the sidebar.

we just came across your blog. having been there a few years ago, and not listening to others who where there before us, please stay in the marquesas as long as you can. we have just arrived in the mediterranean and have longed for the marquesas and tuamotus since we left there. we were not as impressed with the french polynesian islands as we were with the others. have a wonderful time whatever you do. smooth sailing. michael and linda s/y b'sheret

great photos. those yabbies look like small scorpion. hope your fingers are healing up nicely. I'm sure you won't be putting them in any more strange places.

your blog is great and it is fun to be there with you on your adventure.