When we first visited the sleepy seaside town of Melaque a couple of weeks ago, the beach was packed with snowbirds escaping the Canadian winter. We stumbled upon their farewell party at one of the many palapa bars that line the shore, with thatched roofs and umbrella-ed tables perched in the sand just above the high tide mark. A transvestite floorshow had been arranged for the evening, and the image of an old gringo in a John Deer cap placing a folded peso note down the front of one of the performers somehow jars with my idea of the average conservative Canadian pensioner. 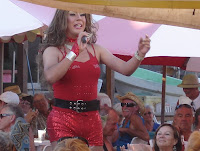 The intervening couple of weeks were spent anchored in front of the spectacular Las Hadas resort, enjoying the use of their glorious pool and other facilities. This was where the movie ‘10’ was filmed, and life there was quite like being on holiday in a movie. 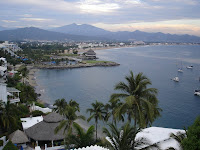 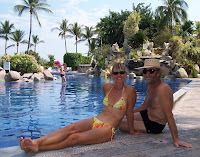 We returned to take in the Fiesta de San Patricio, arriving on Benito Juarez’ birthday and found the 2-mile long beach packed with Mexican families enjoying the warm surf for the holiday weekend. People were burying each other in the fine golden sand, kids were building castles and toddlers were testing its nutritional value. Muchacos, the young boys, practice skim boarding here, running down the steep slope into the last lick of a wave as it recedes, jumping on their boards and riding it out to the next wave, then turning in front of the curling break to surf back in. The world champion comes from this area, which produces ideal conditions most days. The entire Mexican Riviera coastline which we are now following is subject to surf, making our dingy landings anything from interesting to somewhat dangerous, and often soaking us with the sandy froth of a mistimed launching. 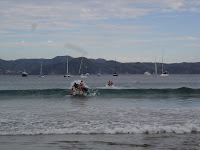 Just before dark last night we negotiated the surf to attend the fiesta in the little town of San Patricio de Melaque. An amusement arcade had taken over one of the streets, with rides and fun-houses, shooting galleries and stands selling fast food (tacos, sweets and hot dogs). Parties don’t get going until late in Mexico, so the place was deserted as we wandered through with our friends from Ladybug. The main event, scheduled for 10.30pm, was to take place on one side of the town square where a tower had been constructed in front of the church. It appeared to be as haphazard as much of the Mexican architecture, and looked more like a roll of number 8 wire that had been draped from a telephone pole. Closer inspection revealed a cunning array of Catherine wheels. The rumor was that this would become a spiral of fireworks, and that a helicopter would take off from the top. Hmmm… I noticed another, similar looking structure on top of one of the shops nearby, but was told it was just a dead vine wound around a hot water pipe. Anyone who knows me might be wondering at this point why I would put myself in the midst of a Mexican fireworks display, given this country’s normal disregard for safety precautions of any kind. We picked a place on the opposite side of the square behind a palm grove, and sat to watch the people promenading around the square. I always enjoy seeing the variety of men’s alligator cowboy boots and matching belts, but even the little kids were decked out in cowboy outfits. The ladies were well dressed too, and only the gringos looked scruffy. The mariachi bands had particularly lovely costumes decorated with gold, as they strolled through the crowd hoping to play a song on their beautiful hand crafted instruments. I suggested that it would have been hard to hear them over the sounds of the brass band in the pagoda, the disco music and screams in the amusement park, squawking toys from the street sellers, and a mass taking place in the church, but they are used to such things and their melodic tenor voices carry above the ruckus if you are close enough. As the appointed hour drew near, the band retreated from the pagoda to a safer place on our side of the square. Their music grew more frenzied and soon a spark appeared at the tower. A chain reaction set off one row of wheels, which spun lazily and went out. Hmmm… Another spark appeared and this time a row began spinning with a few sparks flying off into the crowd. Despite a bit of screaming it seemed a fairly harmless display. I began to think it would be OK. The next row was a little bit wilder, people running this time, but still nothing too dangerous. The band worked itself up to full fury, and the rows of fireworks were whirling, some shooting sprays of sparks high up into the air. All of a sudden there was an enormous explosion right beside us and a 44-gallon drum ejected a massive skyrocket. The concussion rattled my bones, and we ducked for cover on the other side of one of the palm trees. There was another deafening bang and red-hot cinders floated down around us. Each skyrocket that went up coincided with another row of Catherine wheels, more boisterous than the last, generating a lot of smoke and sparks. People were screaming now and running in all directions. Finally, with the detonating drum blasting away beside us, a huge plume of sparks shot up and the spiral that we had heard so much about began spinning. As advertised, a revolving wheel of fireworks lifted off the top of the tower and drifted off above the crowd. It was quite heavy so it didn’t achieve much altitude before plunging amongst the onlookers, still firing out in all directions. Just as we thought we had escaped unharmed, we saw people running in panic towards us with sparks flying out at random from behind them. The epicenter of the pandemonium was a life-sized paper mache cow inside a cage of fireworks, held aloft by a man running through the crowd like some farmyard suicide bomber. The band carried right on playing as he enacted a running with the bulls, darting this way and that, spraying everything around him with fire. The muchachos joined the fun, running with him in a pack, while women covered their kids and ran for shelter, laughing and screaming at the same time. Mexican dogs are apparently used to this action, and jumped in to bite at the sparks. We were stuck now behind the tree, dancing around it to avoid the fallout. As soon as the chaos had passed by us we sprinted across to the shelter of a video store on the other side of the street. The stores here look more like a storage shed with a roller door for the front, so I huddled behind a rack of sunglasses, grateful that others soon crowded in front of me. Each time we thought it was safe to come out from our little refuge under the awning, the storekeeper would warn us ‘otre mas’ and another exploding goat, pig or sheep would gyrate through the crowd, with the band playing frantically the entire time. Finally there was a break in the pyrotechnics and we made a dash for the beach, surviving both the fire and the surf to get home a little after midnight. Although we missed the grand finale (another huge hour-long fireworks display at 5 am) and there was no green beer in sight, we ushered in Saint Patrick’s Day with a memorable party. 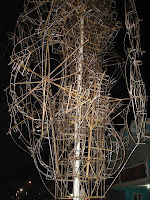 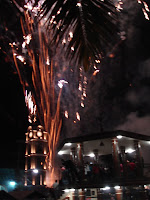