We had heard La Cruz (near Puerta Vallarta) is a musical hub, and were looking forward to the nightly jam sessions in the many bars in town there. However, the day we arrived the weather turned, and we were pent up all day in our first real downpour in over a year. Happy that the mud had finally been washed off the boat, we failed to notice the signs of an impending hurricane force storm front, which hit us at 10pm. The wind rose from 10 to 88 knots in a matter of minutes, switching direction so that rather than being tucked nicely into a protected corner of the wide open Banderas Bay, we were set onto a lee shore with the fetch of the entire Pacific Ocean rolling in on us. The anchor never stood a chance of resetting in those conditions, so all thirty or so boats in the anchorage dragged. Blue Moon was flattened by the first gust and held down on our side, deck under water, green water washing over and into the boat, and unable to maneuver. With the high winds driving the rain at us like needles, there was no way we could go on deck to do anything about the anchor or the objects flying overboard. Luckily the motor intake was on the low side so we could run the engine, and eventually were able to hold our position about 400 feet from the beach by motoring in reverse, anchor still trailing off the bow. We somehow managed to avoid the other boats that were coming at us in the pitch black similarly stricken. Others were not so lucky and several ended up in a tangle, sustaining considerable damage. The worst of it passed quickly and within a couple of hours we had re-anchored with only minor damage. Our aft sun awning had split down the middle at the beginning of the ordeal, but remarkably the two halves remained on board and survived their flailing. Also, poor little Moonbeam, which we lift up alongside overnight, suffered a beating. As heavy as she is, she flapping against our handrail, bashing the outboard repeatedly against the stanchions. Eventually Rob managed to tie her up against the rail, but the outboard needed a bit of a rebuild afterwards. And there is a bit less junk on deck now. We made up for our lack of music at La Cruz when we bumped into our friends on Isis and Ladybug again at Tenacatita. There, we also discovered more water had found its way inside the boat than we first thought, with a repair to our shaft seal required. The resulting bilge cleanout netted two 5-gallon pails of shells and stones that were surplus to requirements. It just so happened that there were a bunch of kid boats in the anchorage so we arranged a treasure hunt on the beach, which easily amused 11 kids and several of their parents for the afternoon. 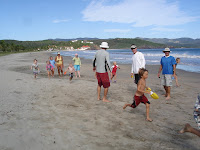