We are sailing north into the Sea of Cortez, along the same route that John Steinbeck traveled during the expedition that was the subject of his “Log from the Sea of Cortez”. We did not plan to follow him, and we have made many more stops than he did along the way. We are experiencing winter in ‘The Sea’, with the brisk ‘Northers’ dictating when we can move and which anchorages we can shelter in. These wicked windstorms can pack gusts of up to 50 knots, sending small tornados through the bay and slamming Blue Moon flat on her side. Steinbeck apparently enjoyed milder temperatures and lighter winds during his visit in March 1940. But the weather is not the only thing we have found different from his account. I wonder what he would think of the place now.

Steinbeck wrote about Cabo San Lucas 69 years ago “To a man straight off a yacht, it is a miserable little flea bitten place, poor and smelly.” Rob passed through here on a yacht delivery in the 1970’s and found it not much different. He recalled a port captain, a small store and a tiny cobblestone fishing village. Rounding the Cape at midnight in 2009, with bright lights stretching far along the shore and up the hillsides, he said it felt as if he had been in a time warp. Passing up the opportunity to stay in the most expensive marina in the world, we visited overland from La Paz. Down by the waterfront, the locals hustle tourists to buy trinkets, take tours or go out game fishing. We watched the boats bringing in the marlin, dozens of them. A 6 year old girl adopted me as we walked around the malecon, imploring me to buy her wares with big pleading eyes and well rehearsed lines (‘make my day’ and ‘its almost free’ and finally just ‘please, please please!’) This seems far removed from “the Indians who sat timelessly on the rail, so used to the spiritual transaction that they had difficulty translating material things into money” portrayed by Steinbeck.

In Steinbeck’s time, foreigners were a curiosity, but today we are just another of the many yachts and gringos passing through. Only a couple of fishermen in their fiberglass long boats with big outboards have come to see us, asking for water and gasoline. Gone are the ‘seaworthy and fast’ double-ended canoes described by Steinbeck. “Sometimes a sail is set, but ordinarily they are paddled swiftly by 2 men, one at each end.” I wonder if there is still anyone alive who knows how to make these craft, ‘carved from a single log of light wood, braced inside with struts’. The Indians in the last century carried iron harpoons, wore traditional clothes and went barefoot. Everything we have seen here so far has been very modern and westernized. As prophesized in his book, “ A local 110-volt power unit and a winding dirt road may leave a people for a long time untouched, but high-voltage operating day and night, the network of wires, will draw the people into the civilizing web, and there is no escape from it.”

Steinbeck’s expedition was a scientific one, collecting and cataloguing the multitude of species that live in the inter-tidal zone. His findings seem incredible to us – ‘tide pools ferocious with life’, schools of airborne fish ‘like a silver blanket’, great long lists of the many different species found in each location, some bays containing ‘literally millions’ of specimens. We did not do a thorough investigation, although we heard that there was a similar study done a couple of years ago to determine what species could be found here now. It would be interesting to know the results of this.

Far from being scientific, we have taken a haphazard tally in some of the places we visited, and it seems to us that a pitiful few hardy samples are what remains of the prolific life along the shores of the Sea of Cortez. We wonder if the health of the ecology can be measured by the number of skeletons of fish, sharks and shellfish found on the beaches. For a great many of these remains litter almost all the bays, and seem particularly plentiful in the parks and bays where commercial fishing is supposed to be banned. Perhaps they have been fished elsewhere, and taken there for cleaning. The pile of precisely filleted carcasses leaves no doubt that these creatures did not die of natural causes. One bay contained hundreds of heads of the strange looking Angle Shark. In another we found a pile of Trigger Fish skeletons. There were mountains of Thorny Oyster shells, Pearl Oyster shells and Scallop shells in various locations. Every beach on one small island in Bahia Concepcion was piled with small Manta Ray skeletons. As depicted in Steinbeck’s Log, there were fish of every type in great numbers, but in skeletal form. He was equally shocked by the Japanese shrimp trawlers that he encountered at Guymas. He watched six of these 150-footers dredging in an overlapping pattern, ‘literally scraping the bottom clean’.” Each dredge came up with many tons of animals. The fish were thrown overboard. The sea was littered with dead fish. Only a few recovered. The waste was appalling.” He called it ‘the complete destruction of a valuable food supply’.

Still, it seems the Sea of Cortez is yielding its wonders to the hungry fishermen. And there must be some fish left in ‘The Sea’ – we have seen schools of hundreds of dolphins, so intent on their fishing that only a few playful ones will break away to leap under our bow. The bird life everywhere is prolific, and we have watched for hours as huge squads of Brown Pelicans and Blue Footed Boobies dive bomb the small fish in the bay beside us. At night, both fish and birds perform a primordial underwater ballet in the light of the most amazing phosphorescence.

This has been a remarkable journey. Few boats come here in winter so we have had some of the most beautiful anchorages to ourselves. We have hiked up the arroyos (dry river beds) and to the top of the hillsides. We have seen giant cactus, and played a concert on a colossal pile of rocks that ring like bells. We swam with sea lions. We found petroglyphs, cave paintings, hot springs, cliffs made of fossils, a wide seam of obsidian, and a crystal cave where water has oozed through the cracks for many billion years to form quartz flowstone. The minerals in the rock faces along the shore have produced the most extravagant colors and patterns, and glow red in the low sun of early morning and evening. At that time, the water is oily calm and also takes on a vermilion hue. We have enjoyed the rickety stonework streets of Lapaz, Loretto and Mulege, where time seems to be caught in another era. We love the abundant sunshine, and the food!

Almost 70 years later, the Sea of Cortez has enchanted us, just as it did John Steinbeck.
3 comments:

Photos from the Sea of Cortez 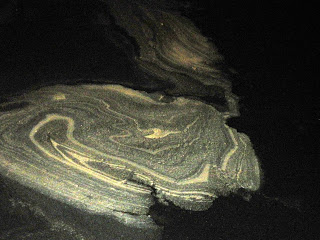 A patch of phosphorescent plankton 10 feet wide glowed in the dark behind our boat one night. 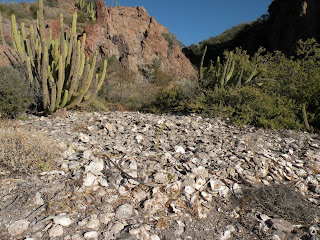 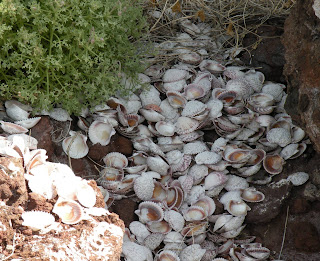 Piles of shellfish on the beaches. 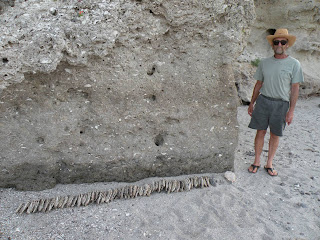 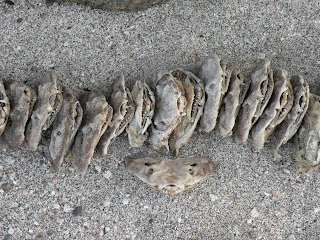 Angel Shark carcasses, and a fossil rock – both creatures doomed to extinction? 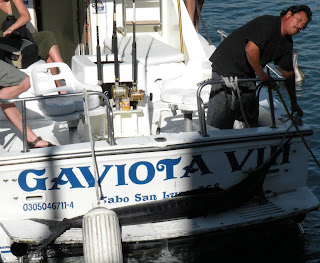 Sport fishing boat bring in dozens of marlin like this one each day. 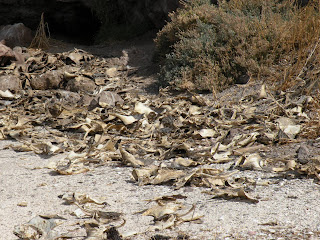 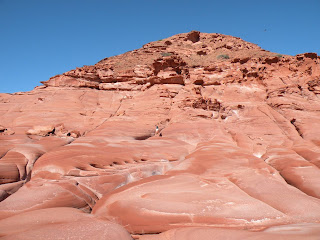 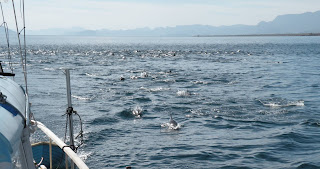 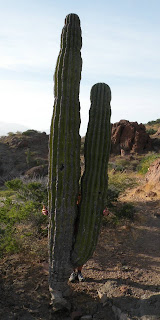 Can you find me in the cactus? 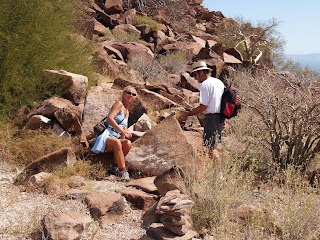 Concert on the Bell Rocks. 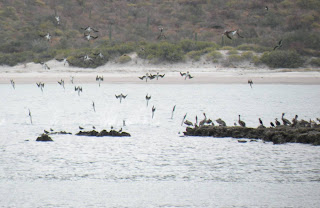