A Year in the Sea of Cortez 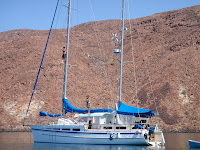 After almost a whole year in the Sea of Cortez, and we are back to where we started, sitting out a 3-day northerly blow before we can get in to La Paz. Although it is less than 400 miles to the northernmost point we reached, and 75 miles across to the mainland, and despite spending 3 months on the hard in Guaymas, we managed to chalk up 1500 miles of sailing around here this year. Did we like it? You bet.

On first glance, the parched red hills seem unable to nurture anything but cactus. But any miniscule amount of moisture is sucked up and plants that appeared to be no more than a dead stick sprout the most beautiful flowers in gratitude. The seedpods and even the branches seem to belong to another planet, with spikes and thorns, patterns and colours that can’t be possible in the world I know. The cacti themselves are amazing – we saw some more than 500 years old, and visited one island where the barrel cactus (normally a squat little cylinder not higher than your knee) grew to 10 feet. Their sheer size compressed them so that they were as wrinkly as a pug dog’s face, and we imagined these prolific succulents hopping about in a sort of sack race on the hillside.

When you get out and walk around, you find the most remarkable things – crystals, geodes and obsidian apache tears, petroglyphs, 10,000 year old cave paintings, rocks that ring like kettle drums when you strike them (not just one but a whole mountain of them), salt ponds, oasis, birds and lizards and the most stunning views. My favourite walk was an 8-hour excursion to ‘Steinbeck’s Canyon’, a rocky slash almost straight up the 4000-foot Giganta mountain range near Escondido. It was after the hurricane had been through so the pools were running with clear cold water and everything was lush and green. At one point, the trail takes you through one of the ponds to a cave on the other side, then at the back of the cave you shimmy up a fallen log to emerge on the top of a huge bolder that sits wedged, 50 feet up, between the sheer rock sides of the canyon like a perfume bottle stopper. From there you enter another cave which leads to a chimney, where the rock face has split off, leaving a gap just wide enough to worm your way up the 20 feet or so to the next part of the arroyo, where we half expected to find Indiana Jones. The last part of the hike is a vertical set of catacombs with waterfalls. We scaled the first of these with some difficulty, sliding backwards on the smooth rocks towards the rocky ledges and pools below. Without climbing gear we were reluctant to make that final push to the top, where we would have seen the Pacific Ocean as well as the Sea of Cortez.

In the sea itself we were continually amazed by the abundance of fish. Gone are the giant manta rays of Steinbeck’s time, and the prolific invertebrate life of the intertidal zone. But the mid-range species are all still here and in vast numbers. We swam with a school of 70 baby eagle rays. We had numerous close underwater encounters with the beautiful and graceful whale sharks, the largest fish in the ocean at 40 feet, although ours were babies of about half that size. Inquisitive sea lion pups came to play with us. We caught tuna and dorado and even a rooster fish (on Thanksgiving Day). The schools of baitfish are so extensive they ring the entire shoreline in some bays. Pelicans and boobies dive-bomb them, hundreds of dolphins pack-herd them, and the Mexicans string their mile long nets pulling unbelievable numbers out of the sea, along with all other life in their path. It is a wonder there is anything left. The rays are in trouble, and the carcasses left by the fisherman on the beach get smaller and smaller. The sharks are all but gone – we didn’t see one at all. The giant humbolt squid seem to have moved to California. The squid fishery this year was pathetic, and one fellow I spoke to worried that it was a sign that the squid would disappear from these waters completely, as they did for 20 years in the 1970’s. So the fishermen have set their sights on other species. In almost every bay, the drone of the hooka air compressor could be heard for hours on end as divers harvested bucketfuls of scallops, lobster and clams. Last year, apparently, they targeted the lucrative sea cucumber, which probably explains why there are none here now.

The big news here in the Sea of Cortez was not the swine flu, although people wandered around with masks for a few weeks when it first broke out. Or the election, which most people seemed to think was responsible for the flu. It was Hurricane Jimena, which cut a path of destruction across the central Baja and through the San Carlos/Guaymas area. We were holed up in the far north with 20 other yachts, including, coincidentally, Neil, another Kiwi who Rob grew up with in New Zealand. It was the place to be, and although we could see the lightning flashing in the distance, and the sky was blanketed with a heavy mist from the frothing salt water whipped up by 100-mile-per-hour winds to our south, it was a non-event for us. Not so for those folks in Santa Rosalia, Mulege, and San Carlos. More than 29 inches of rain dumped in 24 hours, and the flash floods took out roads and bridges and power poles, washed away the contents of houses submerged by 3 feet or more of muddy water, and everything including cars was swept into the sea. We visited these places on our way north, and again as we returned, more than 2 months after the storm. It was amazing to see how fast the Mexicans can rebuild after such a widespread disaster, although power and water had only been restored in Santa Rosalia a week before we arrived. Evidence of destruction was everywhere, and along the foreshore of San Carlos we were saddened to see the wreck of one of our friend’s boats. Fourteen yachts had sunk or washed ashore there, but most were salvaged. Only four remained on their moorings by the end of the storm.

For us, missing Jimena meant that we missed the rain. For the whole year in the Sea of Cortez, only a few muddy raindrops made it all the way to our decks without evaporating in the desert air. The last shower worth shutting our hatches for was on Christmas Eve, last year. 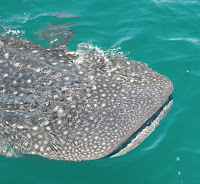 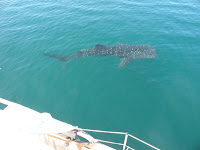 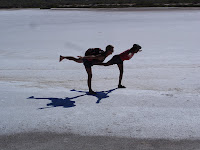 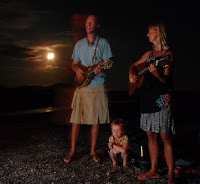 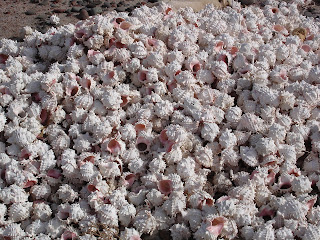 is no longer viable in this village

Spider Crab are a by-catch 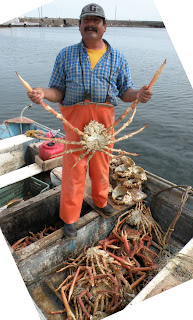 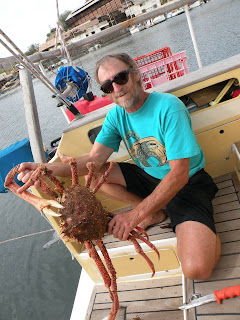 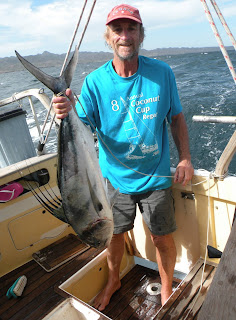 The birds are friendly 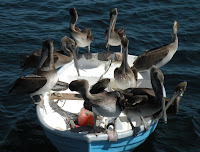 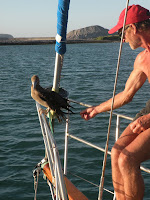 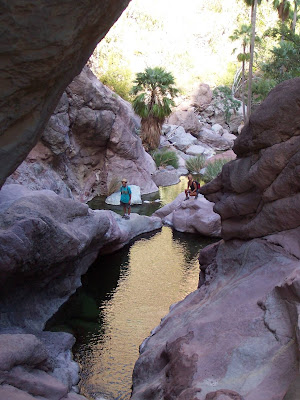 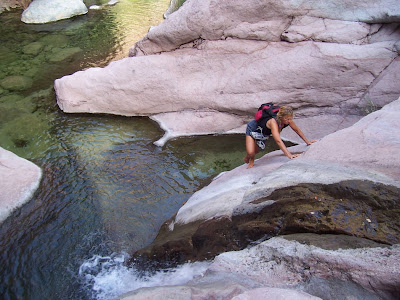 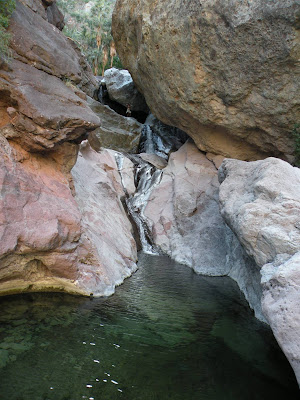 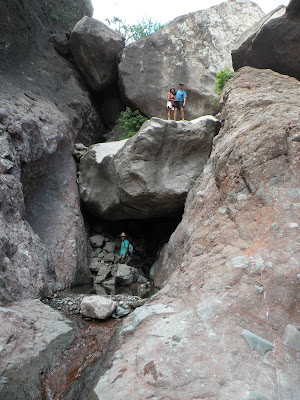 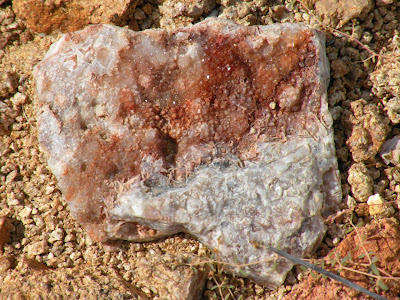 Wierd Things in the Sea of Cortez 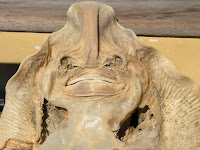 We found this guitarfish carcass on a beach 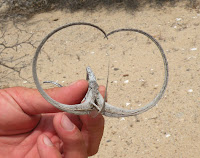 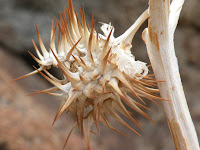 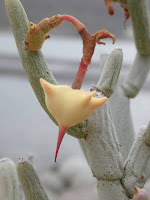 Flowers and Seeds
No comments: 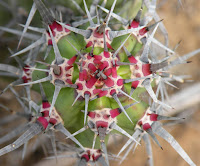 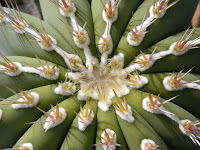 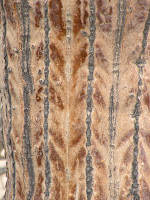 This is a five hundred year old cactus 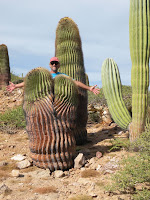 The largest Barrel Cactus in the world grow here