We stood on the spot where Hernan Cortez watched a ceremonial ball game almost 500 years ago and gazed at the terraced stonework rising from the edges of the ancient I-shaped court. By 1520, just 2 years later, the entire civilization whose ancestors built the magnificent city around him fell to the Spanish conquerors, their people reduced to slaves. It would be another 20 years before Pope Paul III declared these people to be human, despite the advanced technology they employed in their construction techniques, the fine artwork that decorated their buildings and their clothing, their skills in weaving, pottery, and jewelry making, their sophisticated knowledge of astronomy and much more we hardly know anything about.

We were visiting the ruins of the Zapotec capital at Monte Alban, founded in 500 BC and expanding to a city of 25,000 people over the next 1200 years. For some unknown reason, the place was then abandoned for several hundred years, before being taken over by Mixtecs, a tribe from the north, around 950 AD. These newcomers used the old tombs to bury their own kings, but the Spaniards later ransacked them for their gold, silver, pearls and precious stones. Only one tomb has been discovered with the burial artifacts intact, the treasure displayed at the local museum.
The sheer size of the ruins was impressive, a central plaza surrounded by pyramid style buildings. Each building has their own function, and all but one are aligned perfectly to north, south, east and west. The exception is a diagonally aligned observatory, which is covered in hieroglyphics, and the tip of the arrow shaped building points to the Southern Cross constellation at solstice. The ancient culture had 5 compass points, which included zenith. We were a few days short of seeing proof of their cleverness, when a shaft of sunlight would reflect briefly through a slot in one of the pyramids to signal the onset of rain and time to plant the corn. The high priests orchestrated such demonstrations to show the common people that they were in communication with the gods. They also had underground tunnels that enabled them to disappear from the central podium and reappear high on an outlying pyramid without being seen by the throng that was gathered to witness their magic.

Monte Alban, however, was not the place where the blood sacrifices were performed. These took place at other villages a few miles away, where the strongest young men, the winners of the games, conquering warriors and other successful citizens would be given the honor of having their still beating hearts torn out to appease the gods. Perhaps this had something to do with the doubts about their humanity.

We visited two of these outer villages. Mitla is an archaeologist’s worst nightmare. First, the Spanish built their San Pablo church right on top of a large section of the site. Then the town of Mitla sprang up, so that today pieces of the ruins are being excavated from under washing lines in someone’s back yard, or walls tumble into disrepair in a parking lot. The tombs and buildings that remain have been subjected to vandalism. This is a real shame because the finely painted frescos that recorded the history of the ancient village are all but lost. These must have been lovely set next to the intricate designs of the stone mosaics this site is famous for. Each wall is made up of millions of tiny, precisely cut stones, some with additional carving on their protruding side. Put together, they form the classic design patterns such as the Quetzalcoatl, a feathered serpent, or the eternal life square wave pattern. These and other designs are still used in their hand woven rugs and blankets. Despite the degradation, there were still plenty of halls, palaces, tombs and plazas for us to poke around.

Our third ruins in the Oaxaca area were at Yagul. Set at the top of a hill, well off the beaten track, the views of the valley below were stunning. A unique feature of this site was a labyrinth of interconnecting rooms. We wandered through this maze-like area until we came upon a bunch of workmen mixing the cement for the ‘original’ plaster on the walls. As with the other places, there were old men trying to sell us ‘genuine’ Aztec clay figurines, kids selling made-in-china looking toys, and women selling everything from local woven clothing to not so local shell necklaces.
The modern city of Oaxaca, nestled between these ancient neighbors, provided us with 4 days of markets, street fairs, music, museums, elaborate churches that rivaled any we saw in Europe, restaurants and food carts. The area is known for coffee, chocolate, mescal (a type of tequila), mole (a spicy chocolate and chili sauce for meats), embroidered clothing, black pottery, dot art wooden animals, as well as the lovely hand dyed and woven rugs. Many of the colors for the dye comes from an insect that lives on the local cactus, which are dried and crushed, then mixed with various compounds (lime juice, baking soda and others) to produce a surprising range of colors. Our ramblings took us to a ‘petrified’ waterfall, the minerals in the water calcifying on the rocks high in the cliffs to create the effect of frozen falls. We also visited the largest tree in the world here, a 2000-year-old cypress whose trunk is 14 meters in diameter – that’s the length of our boat!

This was to be our last side trip before our Tehuantepec crossing to El Salvador. It only whet my appetite for inland Mexico, and her ancient people.
No comments: 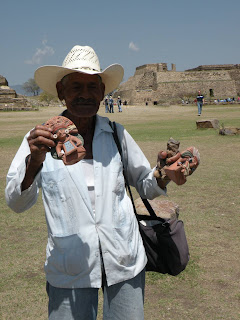 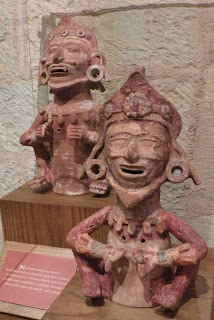 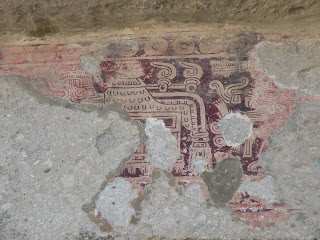 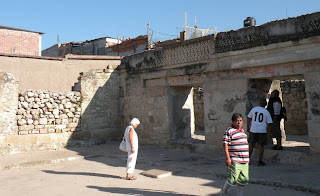 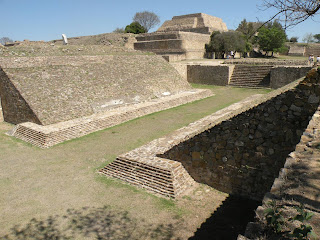 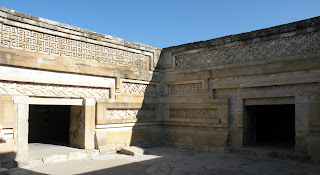 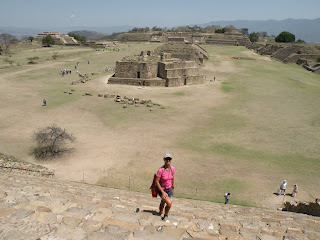 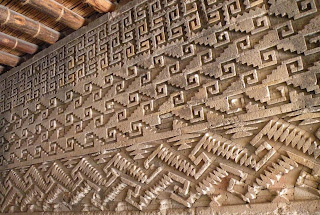 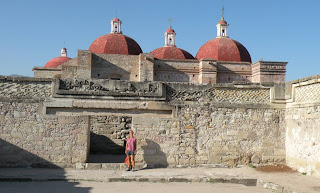 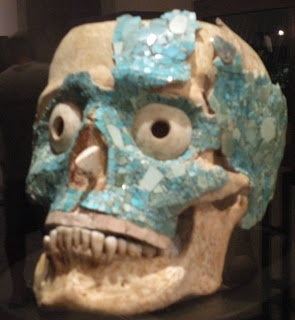 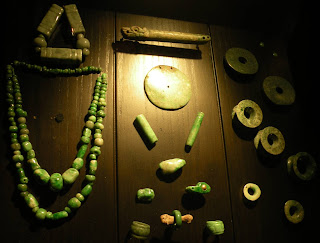 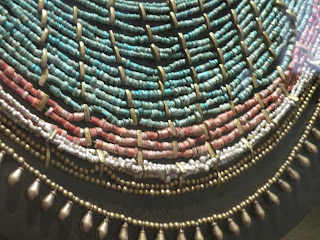 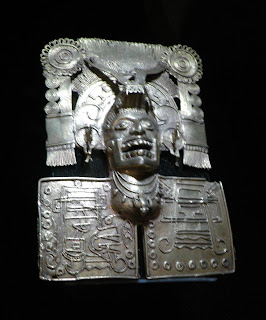 The Sights of Oaxaca 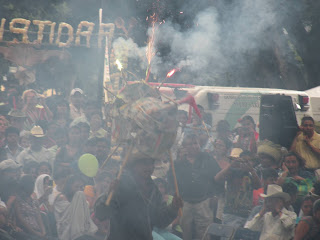 Street Festivals include dancing and fireworks 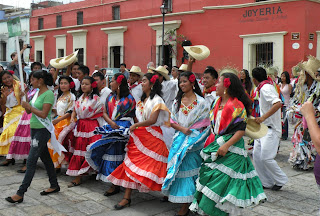 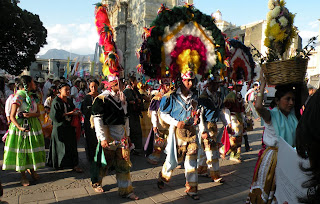 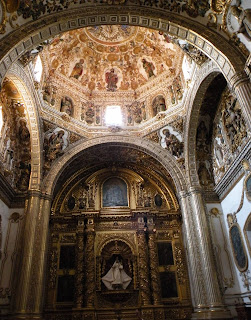 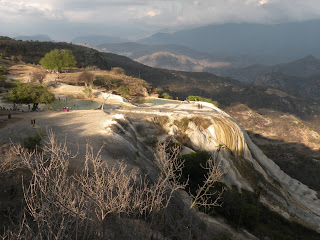 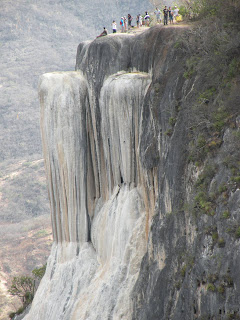 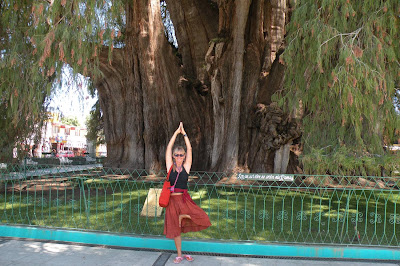 The biggest tree in the world
No comments: 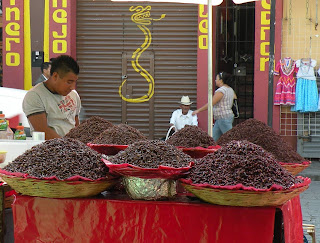 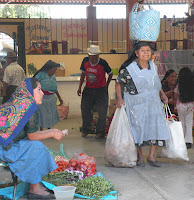 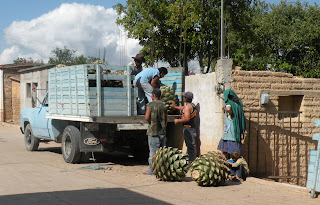 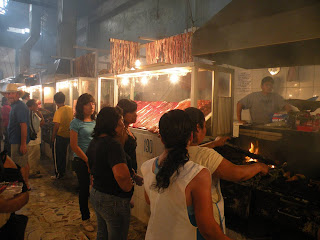 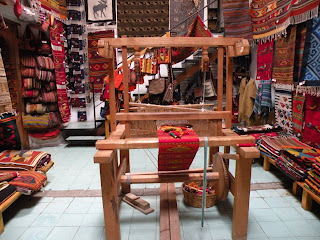 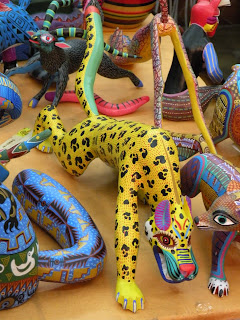 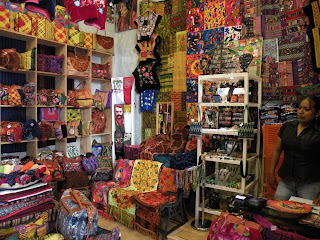 Mixing the dye from Cactus bugs 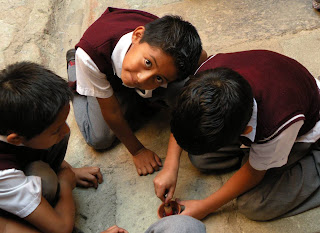 The Music of Mexico

There is nothing as passionate as a young couple in love, and the Mexican songs capture that passion with words that cannot even be translated in to the English language. For the past three weeks we have been privileged to make the acquaintance of a group of musicians who gathered in Zihuatanejo for the winter. Our arrival was ill timed, unfortunately missing the annual guitar fest by one day. But my disappointment was soon forgotten as we strolled from bar to bar to catch a set with the resident performers.

Mexico is a land full of music. The mariachi bands can be seen in any town, strutting down cobblestone streets or along beaches in matching suits of black or tan adorned with silver and gold, complemented by an alligator belt and cowboy boots. The instruments they carry are as beautifully decorated as the musicians. Hand crafted guitars, violins and double bass have inlay patterns around the edges, deep curved backs and colorful strings. Trumpets of all sizes gleam, and the ancient accordions are intricate and unique, each one a work of art in themselves. The first time I encountered such a group on the street I stopped them to ask where they were playing, and thought my Spanish must be lacking when all I could understand of their answer was ‘aqui’ (here). I soon learned that these roving musicians will and do play anywhere, for anyone who will pay them, demanding up to $10 for one song. I saw on group singing into a car window as the vehicle pulled up at the lights on an intersection. Competing with each other or music from nearby bars and discos does not seem to worry them – they just play louder. If you are close enough, the trumpet will reverberate in your breastbone, and you may be hard of hearing for a few minutes afterwards.

Percussion groups are another common sight, their skin bongo drums and rattles mate from animal hoofs set up along any malecon or plaza. These folks seem to be perpetually traveling, whole families living out of a backpack, communing with nature through their infectious beat. We met one such group on New Years Eve, under a full blue moon, their drumming somehow insistent and peaceful at the same time, as if in tune with a higher vibration.

The story would not be complete without mentioning the floor shows that were part of our nightly entertainment in Zihuatanejo. Stages were set up in the street and plaza for performances by the cultural center and hotel dance troupes. Everything from the traditional Mexican hat dance to ballet and Tropicana style numbers were presented by little kids, old ladies and some very energetic professional dancers. Brightly colored skirts whirled, heels clicked, smooth brown skin writhed and glistened but my personal favorite was the platinum man, who moved his spray painted body in ways that I could never have imagined. Not even my most practiced yogis could jiggle a single butt muscle like he did! It was commendable for the city to instigate these events, which drew tourists and local families alike, but of real interest to me were the environmental messages that became part of each show. A few minutes each evening was devoted to topics such as protecting the waterways, promoting catch-and-release sports fishing as an option to stuffed trophy fish, or an invitation to visit the Potosi animal refuge. Our visit to this valuable conservation project will be described in another story.

The soul of Mexico, for me, lives in the singers. Their lightning fast fingers play flamenco and Latin rhythms as their clear voices pour out the passionate ballads of their country. Even without knowing their meaning, one can feel their love and their pain in the break of their voice or the expressions on their face. One evening, the singer’s lovely wife sat next to me, translating the words as I watched the performance. Her beautiful dark eyes searched mine, as if to convey more understanding as she told the stories, and when the songs had finished my emotions felt like raw nerve ends. There is no word in English for the way this music touched me – “me estremezco”.

We came to know several of the musicians and their families during our time here. We took them sailing on Blue Moon, and went out with ‘Rapscullion’ who is also anchored in the bay. We were delighted to watch one fellow learn to swim after bravely jumping off the back of the boat, and only later informing us it was the first time he had been in water where he could not touch bottom. One night ‘Rhumline’ hosted a jam session on their big cat, the first time the 2 guitarists had played together. We were all given one of the many interesting percussion instruments to play, although all of us together could not match the rhythm of the percussionist, who plays most of these instruments simultaneously.

The most magical experience occurred on our last night, when Luis Lara played a song that he wrote for us. This talented composer, singer and guitarist had a seven-year hiatus from writing music, broken only by a single song he wrote when he met his wife. The amazing thing was how intimately he portrayed our lives with his metaphors. Many of us had tears in our eyes when he sang the last refrain of this extraordinary piece of music. We sincerely hope the inspiration remains to continue composing new songs.

As for me, I knew a piece of my heart remained in Zihuatanejo as we sailed away, the tune of ‘Luna Azul’ playing in my head. 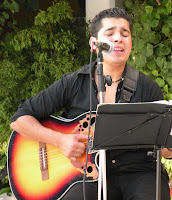