Here are some images of our entrance into Bahia del Sol, El Salvador. We were followed in by 'Rapscallion'. 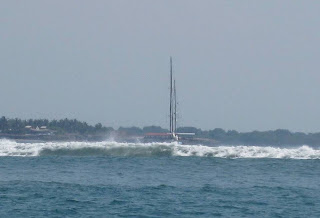 Thats us in front of the surf.. 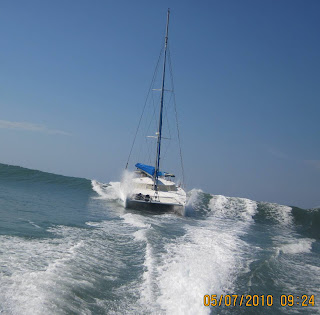 A raft of garbage drifts past the boat on its way out the estuary. It will return when the tide changes, but ultimately it will make its way out the entrance and likely end up on the wide sandy beach at that lines the Pacific coast of El Salvador. We walked over to the beach today to find it completely changed from when we last saw it, more than 4 months ago. Except for the acres of garbage, which is as prolific as ever. No recycling here. Now, though, the beach looks more like the Canadian coast with the remnant limbs of dismembered trees piled thick as far as you can see. These would have been the ones that bumped their way past our boat during hurricane season as the flood waters roared out, lodging the occasional unruly tree across our mooring line and creating a mini waterfall in the strong tide. We worried about that during our long absence but found Blue Moon to be in good shape when we returned.

Reprovisioning was a priority when we returned so I tagged along with friends for a shopping day. There are few shops nearby so they had decided to rent a car to get around and bring their groceries back to the boat. The day began with a 2-hour bus ride to San Salvador to pick up the car. It was my first experience of the local busses. The inside was decorated with pink and purple paint, glitter, mirrors, stuffed animals, a Barcelona football scarf and lots of hanging, dangling things. Latin music was playing at full volume and everyone was chatting and laughing when we boarded. The driver honked his horn, one that sounded like a train whistle, at every opportunity. It was like a party. I found a seat and settled in to enjoy the scenery. Tropical jungle vegetation flanked us, dotted with an incongruous collection of flamboyantly painted stucco mansions that are the holiday homes of the rich city folk, and the rusty corrugated iron lean-tos where the majority of the local residents live.

As the bus got going, a pop can whizzed past my face and out the window to join the endless stream of garbage at the roadside. This is the normal waste disposal system in Central America. It all ends up in the estuary eventually. There are no real bus stops so everyone gets on and off where they like, although the main hubs can always be found by the carpet of plastic that accumulates whenever the bus stops for any length of time. Drinks are sold from the giant bottles, decanted into small plastic bags, twisted shut and served with a straw. Water also comes in plastic bags. Otherwise the bus stops might be atop a mountain of bottles, I suppose.

A conductor made his way down the aisle, clicking a handful of change in my face like castenettes as he collected the fare. When he reached the back door, he jumped off and ran to the front, hopping aboard as the bus gathered speed. The bus filled up and people jammed the aisle but the conductor still made his way through. Little kids, bright and shiny in every way, stared at me from eye level, and the rail-thin old man in a starched white shirt sitting next to me grinned toothlessly, genuine affection crinkling his eyes. More people crammed onto the bus, so that the kids had to lean over the old man, and the temperature rose ten degrees. Everyone was still laughing and the conversations got louder to be heard over everyone else, and the music. At the cross roads about 25 people were waiting for the bus. They all got on, past the driver who was standing on his seat yelling at those in the aisle to make room. At the next stop, a couple of extremely heavy women got on. The largest was pushed up the steps by the conductor, like being shoved into an over stuffed suitcase. Somehow, he made his way past them and clicked his castenette money down the aisle again. The three well dressed men who got on next had to hang out the open door. The conductor hung out behind them the next time he made his way forward. Unbelievably, food vendors came through with their baskets of gum or papusas, making sales all the way down the bus before getting off at the next stop, pocketing their takings in elaborately decorated lacy aprons, the El Salvador purse. Wrappers flew out the open windows. Only one old woman declined the bus, waging her finger in disapproval at the sea of faces pressed against the windows, her mouth a round ‘no’ as the driver slowed for her.

Finally, at San Salvador, the bus disgorged a small metropolis of people, we picked up our car and ticked off our list at a succession of stores. It was getting late we were done, but I had forgotten to buy bananas. So had Christi. Maybe we will pass a fruit shop, she suggested. Twilight was fading as I consulted the map to find the most direct route out of town, with Christie driving. Suddenly the road ahead transformed into a street market. We sneaked in behind a truck, hoping he would blaze the trail for us until we got through it but the truck turned off into a building and we drove deeper into the market. Carts and stalls lined the street with barely enough room for our car to pass, people wandered in front of us, and we were driving at a snails pace, attracting stares, dodging wheelbarrows and trying not to hit anything else. At first it was interesting since we had talked earlier about trying to find the city market. But as the market became more congested, people were shouting, although we couldn’t tell if it was at us or just to advertise their wares. Clearly we should not be driving through here. I spotted a cart full of bananas, and Christie stopped the car beside it. I rolled down my window to ask how much 6 bananas cost, inciting a lively discussion between several of the sellers and eventually we received a whole shopping bag of bananas for $1. I rolled up the window and we carried on, grateful to find a road to take us out of the market. We were thoroughly lost, but we had everything on our shopping list.
No comments: