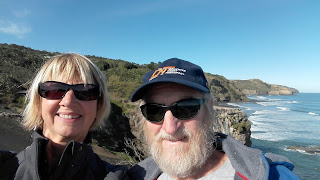 In April I posted my last blog about the remarkable recovery Rob has made from stage 4 cancer (please read below). The good news is he has continued to improve, feeling good most of the time, and defying the predictions of his doctors. We are writing these blogs for the benefit of others who find themselves fighting against the odds. It has been a tough journey, but it’s not over yet.

Here is what Rob has achieved:

·         PSA steady at 7.6 after a peak of 321 one year ago
·         All other blood work normal
·         Weight steady at 70kg from a low of 52kg
·         Eating normally after being unable to swallow anything but smoothies for several months
·         Exercising daily, including 2-4 times per week up a 500m mountain behind our house, without becoming breathless – last year at this time he could not manage 500m on flat ground without stopping several times.
·         Working at normal tasks all day without resting – last August he spent most of his day resting.
·         His recent CT scan shows
o   All the metastatic lymph nodes are approximately half the size of the previous scan last year (he has these in his abdomen, pleural cavity, neck and around the aorta)
o   previously identified ascites and pleural effusions (fluid) are all clear now
o   previously noted extensive bone cancer is now showing a healing response (scar tissue)
o   new lesion on one adrenal gland, however this area was obscured by the swelling of other metastatic nodes last time so it may have already been there
·         new multiple subcutaneous cancer lesions around his left upper chest
·         Development of a hiatus hernia giving reflux (not cancer related)

All this has been achieved without any chemo drugs or radiation. Rob’s only ‘medication’ has been dexamethasone, an anti-inflammatory steroid. The remainder of his regime has been natural therapies, notably an alkaline diet, exercise, intravenous vitamin C and Salvestrol.


Up until we received the CT report, Rob’s doctors had suggested that Rob’s dropping PSA has been due to the orchidectomy, which has starved the cancer of testosterone. However, they have agreed that the result of the recent CT scan was ‘very impressive’ and ‘astonishing’ and that they could not attribute it to the orchidectomy alone. So clearly the natural methods are having a positive impact on Rob’s health.

Changes to his protocol in the past 6 months

Rob has continued to focus on natural remedies, and is replacing his Dexamethasone with a turmeric supplement for the anti-inflammatory properties. His Dex dosage has reduced from 1.5 mg in April to .25mg now and he is hoping to drop this in the near future.

A significant change has been his diet. After taking an IGG blood test (see food sensativity testing and contact me for a discount code if you are interested in taking this test) he discovered a high inflammation response to wheat and a medium response to a number of other foods, notably egg and dairy. His is now completely wheat free and has limited his egg and dairy intake. He has also cut out as much sugar as possible from his diet, including fruit (he had been eating only natural sugars since diagnosis). He has been focusing more on vegetarian meals with very occasional red meat.

To try to get on top of the new cancer lesions he will be taking intravenous vitamin C treatments twice weekly for the next 6-12 weeks. 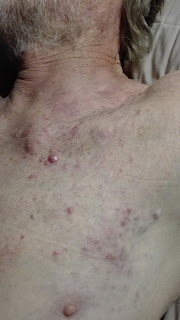 Rob has had some setbacks along the way. He has been prone to injury while building up his weakened muscles, and these have slowed down progress physically as well as mentally. Its hard not to think the worst when he has a pain in his back, for example. He also developed a hiatus hernia which made eating extremely painful. The doctors rushed him off for a gastroscopy, and ordered the CT scan, which all showed a perfectly normal health complaint that was easily treated with a short course of medication. More worrying is a crop of new lumps across his chest, which the doctors have agreed are likely to be cancer. These are just under the skin, so not really affecting anything at the moment. Here is a photo of them.


Where to from here

Traditional medicine has nothing to offer at present. They are keen for Rob to keep doing what he is doing and monitor progress.

Rob’s natural therapists are concerned that the cancer is still there, and want to attack it more aggressively with intravenous vitamin C. None of the natural therapies are funded, so the cost of the additional treatment is going to be around $2000 per month. If anyone is willing to help out I have lots of cool stuff you can purchase – gift vouchers for massage, yoga, retreats or accommodation,  hand- made crystal and pearl jewellery, tshirts and pre WW2 glass fishing floats.  Please email me to find out more.

We are continually grateful for the support of family and friends and the motivation that we receive from you!

If you have any questions about our blog feel free to contact us by email.

We are also available for personal consultations, exercise or nutrition advice, and offer 3 to 7 day retreat vacations at WHYRetreat.